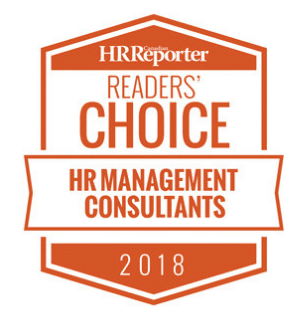 We’re proud to announce that Clear HR Consulting has been selected as a 2018 Canadian HR Reporter Readers’ Choice Awards winner in the category of HR Management Consultants.

“We were overwhelmed at the response from HR professionals this year,” said Todd Humber, publisher and editor-in-chief of Canadian HR Reporter. “More than 65,000 votes were cast in total, which is an unprecedented level of engagement as the prestigious awards competition marks its third year.”

The winners were announced in the July 2018 edition of Canadian HR Reporter, as well as in a special digital edition.

We’re so thrilled to be a two-time recipient of a Canadian HR Reporter Readers’ Choice Award in the category of HR Management Consultants. Congratulations to all the winners. Thank you to everyone who voted for us!